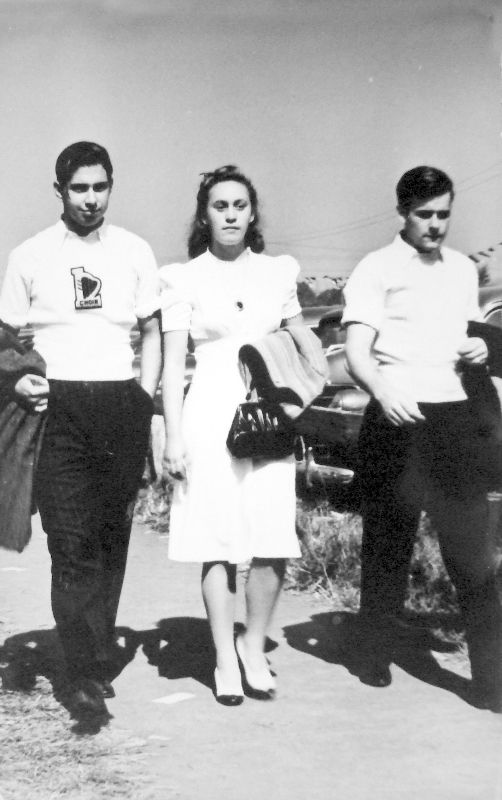 Over the past several years, I have had the unique privilege of corresponding with Lee Hale, a Tacoma native who went on to an illustrious musical career. His generosity and kindness in sharing memories and artifacts of his time in Tacoma have been indispensable in my research, particularly into the music program at Lincoln High School. After hearing the sad news that Hale passed away last month at the age of 96, I wanted to share some of his fascinating life in music.

LeRoy “Lee” Franklin Hale was born March 25, 1923 to parents Ida and Warren, and grew up in the family home at 5911 South Park Avenue. His lifelong musical career would be sparked by his time at Lincoln High School, where he participated in the nationally-recognized choral program. Lee is at left in the photograph above, sporting his Lincoln Choir sweater. When I asked him about his memories of joining the choir, he shared the following:

“Margaret Goheen was kind and friendly to her new students on my first day in her choir class. And then we got right down to business – reading some of her choral arrangements, which were always far-out in my inquisitive mind. That first sophomore year was more than I had hoped for. This was the real thing. I was going to be a part of Mrs. Goheen’s award-winning a capella choir!” 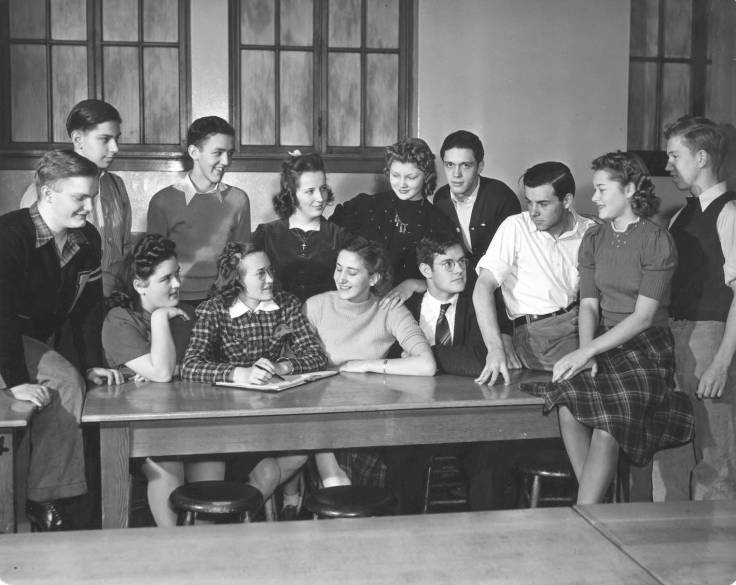 Lee Hale (standing at far left) with members of the Lincoln Choir government for 1939-40.

Before long, though, Hale was taking a leadership role, becoming the leader of the bass section and convincing Goheen to allow him to write and direct a musical to be presented in the Spring of 1941, his senior year. Lincoln had a long-standing tradition of performing an operetta each year – often Gilbert and Sullivan – but Hale and his friends felt that they could liven things up with an original production. 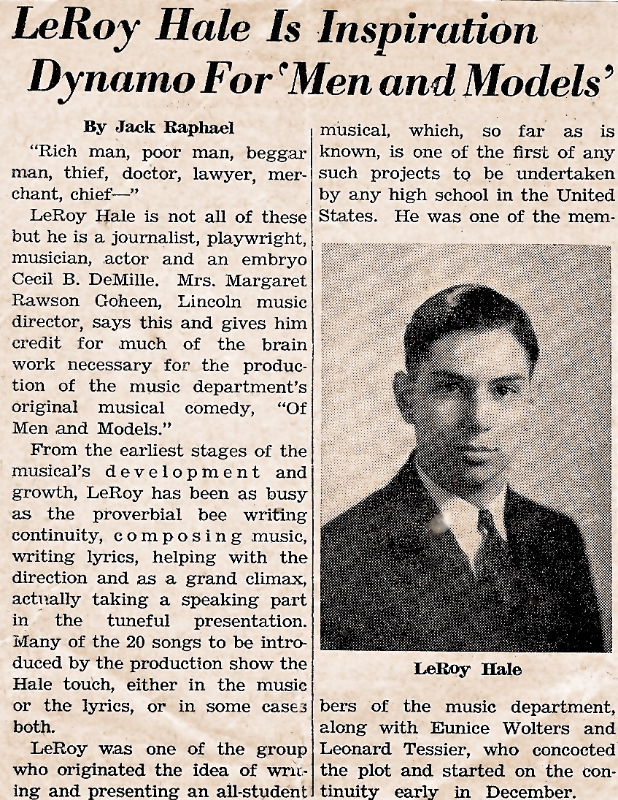 The student-led production was a huge success, selling out the Lincoln auditorium for multiple nights. It was also a sign of things to come for Hale, who would go on to a career in music in which he would continue to utilize his multiple talents: writing, arranging, directing, and performing.

Leaving Tacoma after graduation, Hale went on to serve in the Navy during World War II, primarily in the South Pacific, and also completed degrees in music and journalism from Washington State University, graduating in 1947. From there, he drove to New York in search of work as a musician. He soon became a member of a singing group called “The Manhattans”, which had steady work in nightclubs, hotel showrooms, television shows and theaters. Eventually, he became a Choral Director for numerous singing commercials, radio and television shows, including many Carol Burnett specials, as well as her TV series, “The Entertainers”. 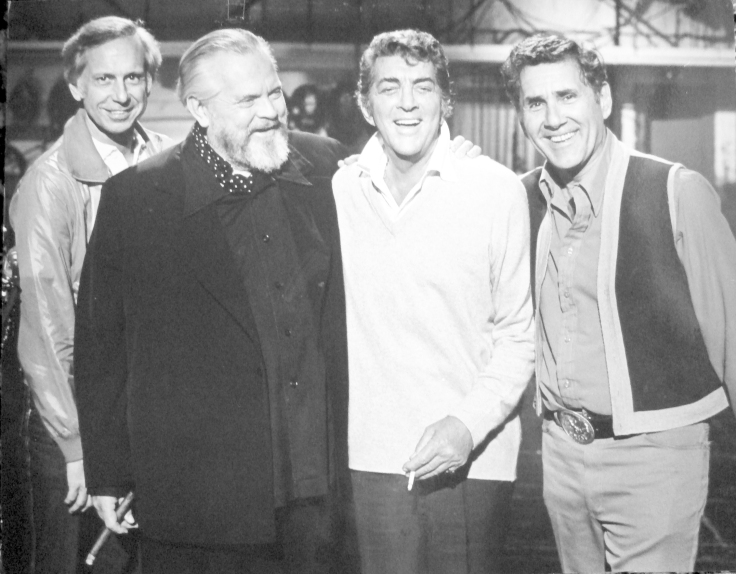 Hale’s musical responsibilities on the Dean Martin show were significant. Not only did he write and arrange all of the music, he also took on Martin’s role in rehearsing duets with the many guests – by many accounts, Martin liked to avoid rehearsals and arrive just in time for the taping of the show. Hale would also, on occasion, join in the fun of a silly comedic bit on the show, as in this example:

Hale continued on as musical director for The Golddiggers, a spin-off starring the female singing and dancing troupe from The Dean Martin Show. His work with these and other dancers would continue right up until his illness of the past year. 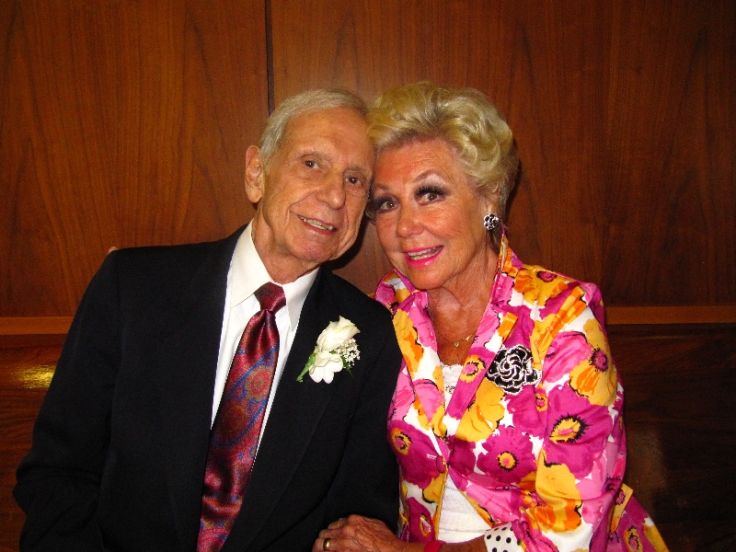 Although Hale’s time with Dean Martin was perhaps his most high-profile work, it is actually only a small amount of what he accomplished as an arranger and producer of music. He wrote and produced music for many other television shows and specials. In 1976, he produced the celebrated four-and-a-half hour special, “NBC’s First 50 Years”, as well as two additional NBC anniversary specials the following year. He wrote special musical material for two Emmy Awards shows and was nominated for a People’s Choice Award and six Emmy Awards. Lee produced three record albums for The Golddiggers, as well as one for Foster Brooks. Called back to duty by producer Greg Garrison, he assembled and co-produced the popular collection of 29 DVDs, “The Best of the Dean Martin Variety Show.” 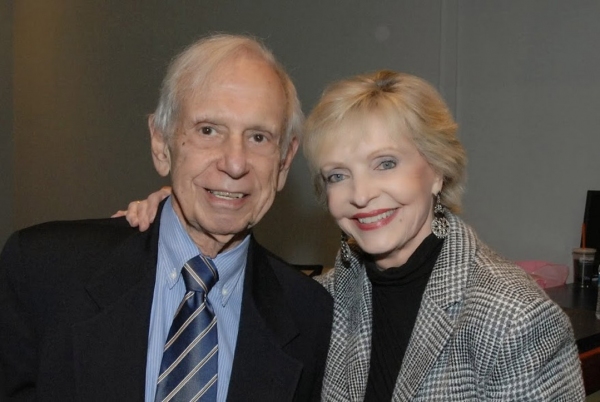 Lee produced many shows for the Society of Singers, and in 2018, was still producing shows and creating memorable video clip packages for the Professional Dancers Society. In 2003, PDS honored Lee for his “tireless support and loyal dedication” and in 2017, bestowed upon him the Legacy Award for his “extraordinary contribution to the world of entertainment.” Lee is survived by his spouse, Richard Neely, together for 34 years.

Although Lee had not returned to Tacoma for many years, in part because he had no family remaining her, he once wrote to me, “You know my heart is still in Tacoma.  I have so many wonderful memories there.”